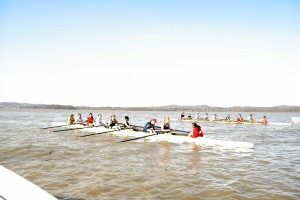 The North Rockland Rowing Club, Inc., a non-profit group (501c-3) that fosters rowing on the Hudson River, has made a commitment to Haverstraw. The Club operates out of the Elks’ Club/Admiral’s Cove Marina, also known as the “gap” by Haverstraw natives. A 60 foot, low profile dock and ramp has been installed at the western end of the Marina and can be accessed at the small boathouse, formerly of the Hudson-Bergen Yacht Club, which was acquired by Ginsburg Development a few years ago to make way for Admiral’s Cove.

This fall, the club will host North Rockland High School students from the school’s crew team so they can stay in shape and brush up on their rowing skills. Jerry Rodriguez, the club’s president, hopes to put a boat together and attend the ‘Head of the Charles’ crew race in Boston/Cambridge this October.

The club raises money through various fund raisers and grants. Nanette Brawer, a club trustee, created an ornate quilt that supported a huge raffle. The club continually finds unique ways to raise money to pay for equipment and for the docks. For instance, the club recently “went green” by starting a new fund raiser that acts to collect your old printer ink cartridges and recycles them for money in return (look for collection containers at Joe’s Bagel Deli in the Garnerville ShopRite plaza). Also, look for the club each year at the International Street Fair in the Village of Haverstraw during the Ferry-Go-Round; the club normally sells various pies from the Conklin Orchards.

To celebrate the inclusion of the North Rockland Rowing Club into the Haverstraw Village community, a dockside ribbon cutting ceremony is planned for October 15th. Several proponents of the docks will attend, including Senator Thomas Morahan and Assemblywoman Nancy Calhoun, who secured grant funds for the Rowing Club to purchase the dock equipment. Mayor Kohut and Supervisor Phillips will also attend.

The Rowing Club hopes the ribbon cutting will mark the introduction of the sport to the Village and its people; they hope interest grows from here and membership in their club grows. “We want Village residents to be a large part of this club. . . we want more people to experience the sport and closer to the Hudson River,” said Susan Rodriguez, a club executive board member.

The Rowing Club is adamant about building a permanent boathouse facility on the shore of the Hudson River. After attempts to build a facility in Stony Point, in Clark Park on River Road and then in Riverfront Park,

the club decided to move to Haverstraw. Originally, the club was afforded a contract to build a boathouse facility at the park by former Supervisor Douglass Jobson. On that premise, the State of New York awarded a grant for $25,000 to the club to pay for design and planning of the facility. The boathouse would have been open to the public and would have been maintained by the Club, at no cost to the Town of Stony Point. Unfortunately, when the current Supervisor Phillip Marino was elected in Stony Point, the contract/agreement was discarded by his administration and the New York State grant was lost. The club is hopeful that they will find better luck in Haverstraw. So far, the Village Board and Mayor Kohut have been more than receptive, and the outpouring of support by village residents has been enormous. The Boathouse planned for Stony Point is pictured on the left.

All Rockland County residents and residents of the entire region are encouraged to join the rowing club. Whether you’re experienced or not, the North Rockland Rowing Club is committed to teaching the sport and expanding awareness. The club will begin to piece together youth, young adult, adult, and senior boats as membership grows. For more information, call Jerry or Susan at (845) 942-1030.

Visit the North Rockland Rowing Club website at: http://northrocklandrowingclub.org/ The rowing club is a designated 501(c)-3 organization, where donations are fully tax deductible. If you would like to make a donation to the North Rockland Rowing Club, please mail a check to P.O. Box 115, Tomkins Cove, N.Y. 10986 or visit this website: http://www.crowdrise.com/northrocklandrowingclub

14 thoughts on “Rowing Club is Welcomed to the Village”