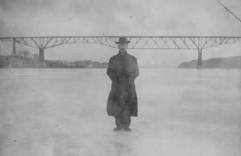 The New York Waterway Ferry has been suspended until further notice for the second time this winter season. Heavy ice on the Hudson River near Ossining has prompted ferry officials to, once again, shut the service down until the ice clears. The reason for ferry disruption is that ice chunks get drawn into the ferry’s cooling system, which is fed by river water, and then clogs the intake. The ferry’s engine cannot cool itself and the ferry’s operation must cease. The picture, above-left, shows a man standing in the middle of the Hudson River, near Newburgh during the 1800s. Back then, it was common for the river to freeze solid all the way across and as far south as New York Harbour. Those brave enough would venture out onto the ice,

sometimes aided by ice skates. My great-grandfather once said that he and his friends would take bed sheets and hold them up to the wind; they would glide at a relatively fast speed on their ice skates, sometimes miles down the Hudson. Many scientists believe that Global Climate Change has ended these deep freezes. The ferry disruption will likely last until Thursday or Friday. Until then, NY Waterway is providing bus service to the Tarrytown train station, where Metro North can take commuters to Grand Central. Don’t worry! It’s supposed to get warmer by Friday; the ice should be gone by then! For more information, visit the NY Waterway website: NYWATERWAY.COM