Antoine McGuire’s, one of the most unique restaurants west of the Tappan Zee, has made its debut on Main Street. It’s been nearly three months since the pub/salon café/brasserie (whatever you can call it) opened its doors to curious diners, and has become a new hot spot in Haverstraw, a welcome addition to Restaurant Row.

I should say that when I first visited Antoine McGuire’s, I was sitting in the rear of the dining room (when looking at the building’s facade, it’s the left side) peering out onto Main Street through the bright café windows, I felt a sense of disconnection from the Village: Where was I sitting, waiting for my food? I could have been on a posh corner in Soho or on a trendy side street in Greenpoint. No, I was definitely in Haverstraw! The experience was exhilarating, impressive, and had completely altered my concept of what the Village is. Haverstraw really is “turning around.”

Antoine McGuire’s. The name immediately sounds quirky. I’ve had several locals say, “But those two names don’t go together! What kind of food do they have?!” So the name is quirky, but it makes sense. Antoine is just a french-inspired rendition of Anthony Accomando’s first name; Anthony is the head chef and co-owner of the restaurant. He hails from the Accomando family empire of dining that extends from J&B Luncheonette on Route 9w and Railroad Avenue, to Babe’s Restaurant on Railroad (West Haverstraw), down Samsondale Ave to Broadway then Main in the Village. “McGuire’s” is Peter McGuire’s; he’s the maître d’hôtel and other co-owner. Now, you might visit the restaurant’s website and learn of different story, one rooted in rich history, on how the establishment won its namesake: read here.

The interior, divided by a center wall, contains both a barroom and lounge with seats for dining, and a formal dining room with seating for up to 40. The theme is definitely recognizable as French bistro with several elements of olde world English/Irish pubs. There’s plenty of exposed brick walls and arches, thick wooden beams, an elaborate wooden and marble bar, and of course, black and white tiled floors. Sea food (oysters, clams and more) sits bar-side on a big mound of ice. Fruits de mer! The walls in the formal dining area are adorned with large-format works by local artists, many of which have galleries or work spaces in Haverstraw (GAGA Arts and Industrial Center). 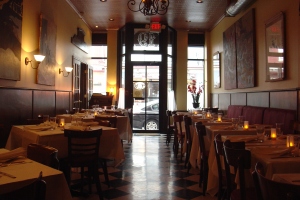 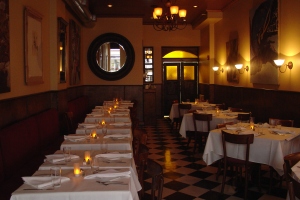 The dining is not really what you would expect; snooty Parisians would snicker and then perhaps, be intrigued. Not only does Chef Anthony serve traditional French fare (and pub food too), but he has an uncanny ability to fuse both Celtic tastes with those that call from France. How dare he! How dare he? Dare he does . . . to everyone’s delight. If you could pair a menu with literature, we should select Mr. Dickens’s A Tale of Two Cities. Beer battered Brie! Really? You should try it. 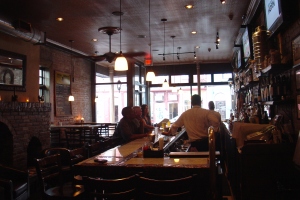 The smoked oyster chowder is incredible, or have the Gratin a l’oignon (French onion soup). For your entree, look no further than the Emerald Isle Salmon or Corned Beef Gratin, or the double cut French style pork chop. I would highly recommend the simple fish & pomme frits (french fries); you won’t be let down! Try not to miss the crispy duck during one of your trips to Antoine’s. The desserts are rotating and are as interesting and tasty as the appetizers and entrees. The atmosphere of the restaurant is awesome, but the food pretty much outdoes the decor. . . and that’s a very good thing. Check out the restaurant’s menu here.

I have to also mention the bar’s tap selection, fine as it is. Peter and Anthony take pride in supporting local businesses and farmers. The tap is filled with the best local brews there are; from Defiant Brewery in Pearl River, N.Y. to Keegan Ales in Kingston, N.Y. to Captain Lawrence in Pleasantville, N.Y., none 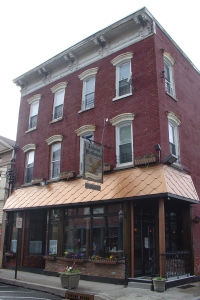 of these brewers are more than ten miles away from the shores of the mighty Hudson River.

Overall the restaurant is a fine experience (food and ambience) and a fresh, new take on the Village of Haverstraw. Haverstraw is on its way, taking baby steps now, to become a regional dining destination. If you’re a New Yorker and want a nice day trip “into the country,” I highly recommend coming up the Hudson to the Village for some hiking, enjoying the widest part of the Hudson River, and capping your day off with Antoine McGuire’s. If you’re a local, well, this place is in your backyard! They even boast a post-5 o’clock bar crowd, just off the Haverstraw-Ossining Ferry. Oysters and beer anyone?